Twenty first century black women advocating on behalf of black girls are building momentum around policy and research meant to address with precision the age-, race-, and gender-specific problems of black girls. At the top of the agenda of activists, funders, and even the White House, is the criminalization of black girls. In publications such as Pushout: The Criminalization of Black Girls in Schools (2016) by Monique M. Morris, and the African American Policy Forum’s 2015 report entitled Black Girls Matter: Pushed Out, Overpoliced and Underprotected, scholars have analyzed the distinct processes that lead to black girls’ run-ins with school discipline and the juvenile justice system, emphasizing the need for an intersectional understanding of the complexities of contemporary black American girlhood.

Today’s advocates for black girls are stepping into a long tradition of black women’s organized intervention on behalf of criminalized black girls. Viewing the activism of late nineteenth and early twentieth century black women through the lens of Kimberlé Crenshaw’s concept of intersectionality reveals the nuanced nature of their approach to this issue. Organized black women (most notably through the National Association of Colored Women’s Clubs and its state subsidiaries) studied, opposed, and worked to transform the status of the criminalized black girl—a status which, in the post-Emancipation South, could include incarceration with adults. 1 They argued three points: 1) black girlhood was a distinct time of vulnerability and potential, 2) delinquent black girls in particular were worthy of protection, and 3) state governments were obligated to participate in the work of reforming delinquent black girls. The case of Virginia illustrates the intersectional nature of black women’s critique of the criminalization of black girls.

Until 1891, criminalized black and white youth of both sexes were incarcerated with adults in county jails or the State Penitentiary. As the nineteenth century came to a close, state officials pleaded for the establishment of juvenile reformatories. Private organizations in Virginia ultimately heeded this call—not until 1920 were the reformatories transferred to the state. The Prison Association of Virginia founded the Virginia Industrial School for [White] Boys in 1891. The Negro Reformatory Association built the Virginia Manual Labor School for Colored Boys in 1900. A coalition of civic and religious organizations established the Virginia Home and Industrial School for [White] Girls in 1910. In 1915, black girls at last gained access to a reformatory due to the advocacy of the Virginia State Federation of Colored Women’s Clubs (established 1907). 2

At the 1910 Virginia Child Welfare Conference, Virginia Federation of Colored Women’s Clubs president Janie Porter Barrett gave an address entitled “The Need of a Reformatory for Colored Girls”. In it, she delivered an intersectional analysis of the problem of the delinquent black girl, a subject situated at the nexus of gender violence, racial oppression, and the denial of black childhood.

“In dealing with the problem of the delinquent boy and the delinquent girl, we must keep it clear before us that we mean different kinds of delinquency. The fault which makes the girl an offender of law and order, in a boy is overlooked and goes unpunished. Society has yet to learn that the personal immorality of the boy brings just as much crime, disease and illegitimacy as the personal immorality of the girl. Until this lesson is learned the wayward girl problem will continue to be most difficult. The fact we must face is that it is just as dangerous to leave a wayward girl in the community uncared for, as it would be to leave a case of smallpox or yellow fever uncared for. Immorality is a disease just as contagious and far more deadly.” 3

Here, Barrett articulates the gendered construction of the category of ‘juvenile delinquent’. Boys and girls, she argues, experience different consequences for the same behaviors. The female member of a sexually active heterosexual couple could reliably expect legal and social sanctions. The boy, however, would not be held accountable for “personal immorality,” even though boys’ sexual exploration could be as much, if not more, of a source of social disorder in the form of venereal disease and illegitimacy. Barrett goes on to say,

“The wayward girl problem is not a race problem, but a community problem, and every home is in danger. The negro girl because of previous conditions, I suppose, has no rights that any man, white or black, feels bound to respect. No indignity or crime heaped upon her offends society, and in very few cases does it offend the law; so beyond a doubt she is the most unprotected of all human beings. When we find her running the wayward girl record high, indeed, we can’t expect any more.” 4

This segment of the address reflects the national consensus of black women’s organizations that both law and American social norms failed to recognize and protect black girlhood. Barrett traces the raced nature of the “wayward girl problem” back to slavery—invoking the 1857 Dred Scott decision, in which the U.S. Supreme Court affirmed that black people were never intended to enjoy legal rights in America. In this context, Barrett argues, black girls could suffer sexual victimization (“indignity or crime”) with complete impunity because their young bodies were neither protected by law nor socially considered to be out of bounds. Sexually precocious black adolescent girls, or girls who were victimized sexually, were perceived as merely acting out their racially prescribed role of sexual availability—not as needing moral redirection.

Barrett goes on to detail black women’s institution-building efforts, and to subtly relay her expectation that the state of Virginia would eventually fulfill its obligation to care for its vulnerable black female children. She states:

“The women of the State Federation of Colored Women’s Clubs of Virginia realizing that something must be done, and done quickly, have taken as their special work the erecting of an industrial home school for wayward girls…Our plan is to build it on the cottage plan, which will enable the girls to get the home training that would not be possible to get in any other way. A cottage with a good woman at its head, who will give a group of girls the love and sympathy they need, can work wonders in making these girls into respectable, useful women. When we have done our best we are going to appeal to our white friends and the State for assistance, and, after all that I have heard in these meetings about co‐operation, I feel sure that we will not appeal in vain.” 5 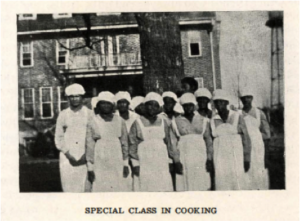 Barrett’s articulation of the club women’s vision for their reformatory reveals the centrality of girlhood to their reform project. She constructs black girls as subjects needing “home training,” “love,” and “sympathy” from mature women in order to develop into “respectable, useful women.” Barrett and her colleagues operated from the assumption that black women and black girls occupied two discrete life stages. The stable, homelike environment these women envisioned would shield black girls from punitive settings that elided age difference among black female inmates, enabling them to enjoy the protections to which they were entitled as children and adolescents. 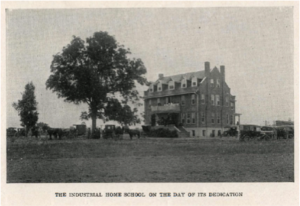 Five years after this address, Virginia’s black activist women succeeded in opening the Virginia Industrial Home School for Wayward Colored Girls. Janie Porter Barrett led the school as superintendent from its opening in 1915, through its transition to state ownership in 1920, and until her retirement in 1940. Situated on a sprawling farm in Hanover County, this institution was home to over eight hundred girls over the course of Barrett’s superintendency. In annual reports between 1916 and 1939, Barrett’s descriptions of life at the school are occasionally interspersed with astute assessments of the ways in which systems of race- and gender-based oppression shape the life chances of her charges. One century after this school was founded, the criminalization of black girls still illustrates the extent to which the categories of blackness and girlhood exist in tension. From positions of influence unavailable to prior generations of black women, advocates for black girls continue to study, oppose, and work to change this reality, articulating a relentlessly intersectional analysis of the simultaneous vulnerability and potential of criminalized black girls.

This post originally appeared on The African American Intellectual History Society Blog and is reprinted here under a Creative Commons Attribution-NonCommercial 4.0 International License.